The power of the human mind over the reasoning machines

There is a special term to describe the Intelligence of Computers that, in fact, only mimics Human Intelligence to some extent. It is called Artificial Intelligence (AI), to stress that it is carrying synthetic nature. Coming back to 1980, the Military had been supporting AI research for more than 20 years, and the time had come to ask why almost all efforts to build AI systems, capable 'of providing expert medical advice, of exhibiting common sense, of functioning autonomously in critical military situations' had failed.

On February of 1980, brothers Dreyfus (Stuart E. and Hubert L.) presented their report on the research at the University of California, Berkeley with support of the Air Force Office of Scientific Research - "A five-stage model of the mental activities involved in directed skill acquisition". This model shows how human acquire new skills by means of instructions and experience. After the publication, they continued working on the model and with a few changes and extensions, results were published in their book "Mind over Machine. The Power of Human Intuition and Expertise in the Era of the Computer", in 1986. As brothers said in the book, 'our intention is more modest but more basic' - 'what we can reasonably expect from computer intelligence'.

A process of a skill acquisition normally passes through five developmental stages (novice, advanced beginner, competence, proficient, expert). Each stage characterizes a certain behavior and a mental response on a situation. A successful transition from one stage to another is associated with the appropriate transformation of four mental functions: recollection, recognition, decision, awareness. The understanding of the developmental stages is essential for any skill-training procedure so it can facilitate a process of acquiring new skills and an advancement to the next stage. For humans beings, the whole path from a Novice to an Expert usually takes 10 years, on average. Or, what is more realistic, 10 000 hours of learning and practice. Some research has also shown that there are only up to 5% of Experts on the Planet, regardless of the field of their expertise.

In the report was also pointed out that 'as the student becomes skilled, he depends less on abstract principles and more on concrete experience' and that only a 'skill in its minimal form is produced by following abstract formal rules'. Thus, the higher levels of performance are depended on 'everyday, concrete, experience in problem solving'. By gaining experience, a student is able to start from scratch by following rules of acting on context-free situations. Then, having gained a little experience, a student is able to use guidelines for reacting on situational aspects. Further practice leads to being able to use maxims (principles) to determine an appropriate action. All these three transformations correspond to the first three stages and always represent some sort of analytical process of decision making which is needed 'to connect his grasp of the general situation to a specific action'.

The significant change occurs at the 4th stage when the amount of 'experienced situations is so vast that normally each specific situation immediately dictates an intuitively appropriate action'. The key point here is the move 'from analytic thought to intuitive response'. The highest level of expertise with masterful performance only takes place when the expert 'no longer needs principles' and is able to 'go into producing almost instantaneously the appropriate perspective and its associated action'. This is one of the most important observations: experts perform beyond the rules and their performance degrades significantly when they are limited by any kind of formal rules or processes. In 2008, the Pragmatic Bookshelf published an excellent book "Pragmatic Thinking and Learning" written by Andy Hunt. It gives a lot of insights about the human brain and how it works, a number of tips to learn more and faster, including a detailed review of the Dreyfus Model (Ch.2).

The understanding of the difference between the human mind and how a reasoning machine "thinks" helps to meet realistic expectations in developing Artificial Intelligence Systems. In the desire to define what computers should do, first, it needs to be clear what computers can do. In this regards, the computer is an analytic engine, so it can apply rules and make logical inferences. Clearly, at extreme speed, with high-grade accuracy, and remarkable reproducibility, but still, it follows a certain logic. It turns out that exactly this crucial difference between, perhaps perpetually limited, a "reasoning machine" and intuitive expertise of the human mind, irreducible to rules, seems to be a good starting point in finding out the balance between humans and computers. 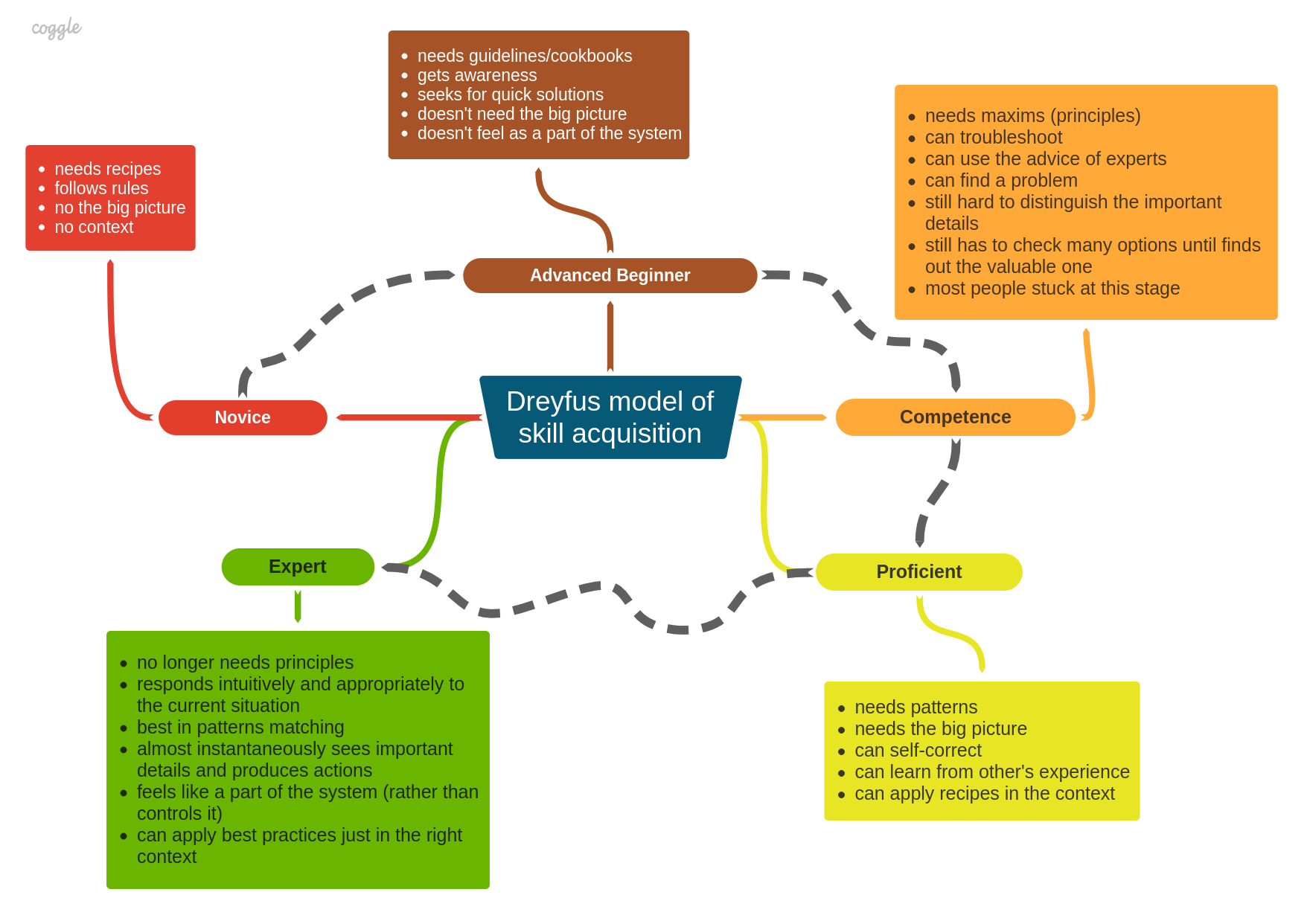 This is my personal blog. All ideas, opinions, examples, and other information that can be found here are my own and belong entirely to me. This is the result of my personal efforts and activities at my free time. It doesn't relate to any professional work I've done and doesn't have correlations with any companies I worked for, I'm currently working, or will work in the future.